Welding is the process of coalescing materials such as metals or thermoplastics in order to seamlessly join them. The welding process involves applying heat and pressure to the materials being joined, in addition to a filler material, in order to create a weld pool which cools to form a strong joint.

Even though the process of welding itself has greatly evolved with the advent of new technology, it is important that we understand the differences between all the existing welding techniques in order to make an educated decision when it comes to picking the right technique for the job as well as hiring someone who knows what they’re doing. In this post, we will break down all the different types of welding and explain each one.

Arc welding involves the use of a power supply and electrodes in order to form a welding arc between the electrode and the material being welded (usually metal), in order to melt the materials, allowing them to cool and fuse together. This method is probably the most popular type of welding process since it includes many of the most popular types of welding, such as MIG, TIG, and Stick welding. Arc welding is divided into consumable and non-consumable electrode methods. Although mostly considered archaic nowadays, especially when compared to the TIG and MIG, shielded metal arc welding, or stick welding, is a manual welding technique that relies on a consumable electrode coated in flux that is then used to lay the weld. This process is called stick welding because it uses welding sticks or rods that are made up of filler material and flux, the flux is used to protect the molten metal of the weld and the filler is then used to join two pieces of metal together.

Stick welding offers a very low-cost welding solution that requires minimal equipment. However, the quality of the final weld is not always the best as it can suffer from porosity, shallow penetration, cracking and it is highly vulnerable to severe weather and is generally less durable. Despite the fact that stick welding is a very old technique, it is still quite popular, especially in third world countries where expensive or new equipment is usually not widely available. Some of the fields that still rely on stick welding include refrigeration, plumbing, automotive and construction. MIG welding is the second most popular welding technique used today. MIG stands for Metal Inert Gas Welding and it boils down to the concept of combining two pieces of metal together with a wire that is connected to an electrode current. The wire then passes through the welding stick which is shielded by an inert gas.

Some of the advantages that MIG welding offers over the other welding techniques include ease of use and the lower degree of precision that is required by the operator in order to obtain decent welds. However, MIG welding usually ends up being a bit more sensitive to external factors like wind, rain and dust and generally more settings like voltage and wire speed need to be finely tuned by the operator. The two most common quality problems associated with Metal Inert Gas Welding are dross and porosity. If these are not taken care of properly, welds might end up being structurally weaker than their TIG counterparts.

MIG ends up being much easier to master for operators as it is quite simple because the electrode is being automatically fed through the torch. Unlike TIG welding where both hands are used, in MIG the operator guides the welding gun across the area being welded.

MIG welding is most commonly used in automotive repair as it is capable of providing a strong, sturdy weld that when done correctly is able to withstand large forces, providing the level of versatility and strength that is needed for such applications. MIG welding is also commonly used in plumbing, construction, robotics and the maritime industry and is generally considered an improvement over the more archaic techniques.

Flux-Cored Arc Welding is quite similar to MIG, except for the fact that it uses a special tubular wire filled with flux and the shielding gas is not always needed, depending on the filler. FCAW is notable for being extremely inexpensive and easy to learn, although there are several limitations in its applications and the results are often not as aesthetically pleasing as some of the other types of welding methods.

Some of the advantages it offers over other techniques include versatility, due to the large amount of fillers that can be used, suitability for outdoor welding and windy conditions because no shielding gas is needed with the right type of filler and the fact that it is a very fast technique that tends to be very forgiving on inexperienced operators.

Used mostly on ferrous steel and nickel-based alloys, Submerged Arc Welding is a rather common Arc welding technique due to its minimal emissions of welding fumes and arc lights, making it safer than most welding processes. SAW results in deep weld penetration, and involves minimal preparation, making it a quick and efficient form of welding.

Patented in 1935 by Jones, Kennedy, and Rothermund, Submerged Arc Welding involves welding beneath a blanket of granular fusible flux consisting of silica, calcium fluoride, lime, manganese oxide, and other compounds. As heat builds up the flux becomes conductive and provides a path between the electrode and the welding material. Since the whole process takes place beneath the flux, the welder is protected from ultraviolet and infrared radiation that are a natural part of the SMAW process. 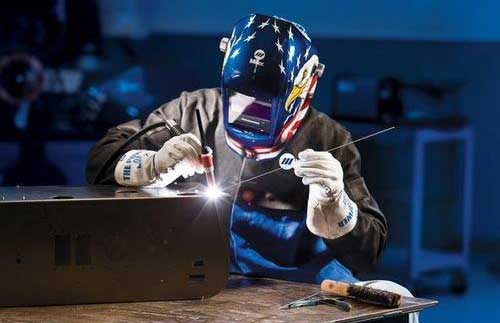 TIG Welding stands for Tungsten Inert Gas and is a technique that’s known for using a non-consumable tungsten electrode along with an inert gas (usually argon). Tungsten is a rare, hard element that offers a high purity, high-quality weld.

In TIG welding, the heat is created by running an electric current through a tungsten electrode, creating an arc that is then used to melt a metal wire in order to create the weld pool.

TIG welding is the most popular welding technique used today because it offers a high degree of purity, a clean weld and it can be used in many industrial, residential and commercial applications. TIG is most commonly used to weld stainless steel together, although other metals like magnesium, aluminum, copper and nickel can be welded using TIG.

TIG Welding is highly popular in industries that work with nonferrous metals and it is commonly used in the manufacturing of vehicles, tubing, bicycles, as well as the maintenance and repair of tools and dies made of aluminum, magnesium and stainless steel and it is the preferred technique by engineers who demand a high degree of precision on their welds as it offers greater control over the weld area than other welding processes, although the final quality of the weld will be affected by factors such as cleanliness, operator skill, quality of the materials being used and other external factors such as rust or grit.

Known for being a very efficient, single-pass welding process that is generally used on thick, nonferrous metals. It is known for using an electric arc that is struck by wire and then fed into the welding puddle along with flux until the slag reaches the electrode and extinguishes the arc. As stated before, this technique is mostly used to weld thick pieces of metal as it requires a very high level of skill and it is very popular in maritime applications as well as the aerospace industry.

This is an older Arc welding process which is slowly being replaced by gas metal arc welding (see above). The process of atomic hydrogen welding was invented by Irving Langmuir after his discovery of atomic hydrogen and involves placing two metal tungsten electrodes in a hydrogen atmosphere, leading to the hydrogen molecules breaking up and recombining in an explosion of heat which can reach temperatures above 3000 degrees celsius.

The AHW torch is hot enough to weld tungsten, which is highly resistant to heat and does so in a manner that does not damage the metal and creates a strong, cohesive weld.

Developed in 1881 by Nikolay Benardos and Stanislaw Olszewski, carbon arc welding is the first Arc welding process ever invented but is hardly used today as it has been replaced by more efficient and less dangerous processes such as twin carbon arc welding. The process welds metals together by heating them with a non-consumable carbon electrode, heating them to temperatures in excess of 3000 degrees celsius.

Invented in 1961, Electrogas Welding is similar to Electroslag welding in that the metal being welded is struck with a consumable electrode, without the use of pressure. Divergent from its ESW counterpart, in EGW the arc is not extinguished, and remains struck during the process. It is mainly used in the shipbuilding and storage tank industries.

In addition to Arc welding, there are a number of other welding methods that we’ll quickly through below.

Developed in 1903 by French engineers Edmond Fouché and Charles Picard, Gas welding, Also known as Oxyfuel welding or oxyacetylene welding, is the process of combining fuel gasses and pure oxygen in order to increase the welding torch’s flame temperature to around 3500 degrees celsius.

It is one of the oldest welding processes and is still used today in certain industries such as pipe and tube welding, as well as certain repair industries. There are even some types of metal-based artists using gas welding to this day.

This process involves applying force to adjacent surfaces and then applying an electric current near and upon the surfaces, generating intense heat. There are many variations of this technique, namely spot welding, seam welding, butt welding, flash welding, projection welding, and upset welding.

Solid-state welding produces welding through temperatures below the melting point of the materials being welding and does not use a filler material. This process relies on the trifecta of time, temperature, and pressure, individually or in tandem in order to join the metals without significantly melting them. The curious thing about solid-state welding is that it’s one of the oldest forms of welding, and yet some of the newest and most modern welding techniques are based upon it as well.