It seems safe welding practices have been mostly theoretical up until the last 10 or 15 years. When I first started welding back in 2005, safety glasses and respirators were taboo. Thankfully, things today are more geared towards worker safety rather than employer profits.

It’s no secret this is because of the massive rise in workplace-related injuries in the late ’80s and the government’s wish to lower costs, but the fact is today’s workplace is much safer than it was when I first joined the trade, and it’s only getting better. Make sure you have all the necessary welding safety equipment before you begin welding.

The biggest shift in welding safety has been ventilation. More and more companies are opting for smoke eaters in every welding station, air-socks on the roofs, and personal respirators for employees. A good employer will understand that an investment in safety is an investment in themselves. The more time an employee spends at work and not nursing Zinc poisoning means more production and less spending on insurance fees (or sick days).

Short term effects are manageable. What’s called “Metal Fume Fever” is a common illness among welders who aren’t careful of what they’re breathing in. It’s relatively short lived and the symptoms pass after a day or two (and no, drinking a glass of milk in the morning does not protect against this).

Long-term effects of welding fumes, however, are staggering. Considering most carbon and stainless steels contain an element called Manganese (25Mn), it’s not a stretch to understand the connection between welding and an illness called “Manganism”, something very similar to Parkinson’s. Further effects are lung cancer, heart disease, stomach diseases, kidney damage, motor and neurological problems.

An employee’s and employer’s options are these:

Portable Fume Extractors: These guys are essentially industrial smoke eaters. Consisting of a large, articulating vacuum tube, and a filtration system, they are very simple and very effective. Just wheel them to where you’re working, set the vacuum head above your table, and go. The filter will need to be cleaned or replaced from time-to-time, but it’s worth it. 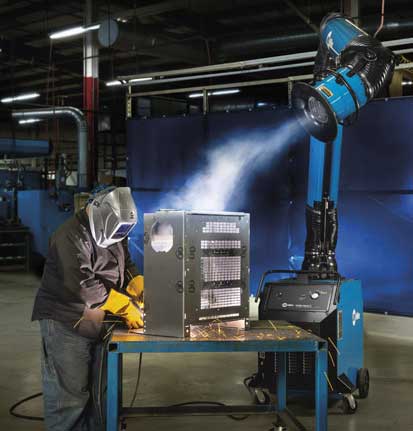 Ceiling Ventilation: It works, but not as well. I am familiar with an air-sock system: large tubes, or “socks” mounted on the ceiling. Designed to create negative air pressure and push the fumes outside the building. The downside is the fumes have to reach the ceiling, meaning the welder has already inhaled his or her share of particles by the time the sock gets any of it.

Personal Respirators: In some cases, just having a respirator is enough, but it should be used in addition to fume extraction. These require a seal to be made on the welder’s face, so being clean shaven is important. Another option the welder has is purchasing a CBA (contained breathing apparatus) that supplies clean air into his hood. However, these run above $3000.00, and few situations call for them (enclosed spaces for example). Some days, you just stand there and tack weld all day long. Maybe you started the day with your welding helmet on, but by coffee time your neck and your head are aching from flipping your helmet down for every tack. What do you do? Take the helmet off and close your eyes. You’ve done it, I’ve done it, and your boss has done it. We accept the consequences at the end of the day. Sun-burn (raccoon eyes, anyone?), dry skin, and that pesky purple dot that ever eludes your direct gaze.

But what are the real consequences of this?

Welding gives off radiation between 200 and 1400 nm (nanometres) in wavelength. That covers ultraviolet, visible light, and infrared radiation.
Ultraviolet (or UV) radiation is categorized into three sections: UV-A, UV-B, and UV-C. UV-B and C are absorbed in the cornea, whereas UV-A skips this and is absorbed into the lens of the eye.

A common term is “Arc Eye”, or Photokeratitis. It is essentially a sunburn on your eyeball (more accurately, the cornea and the conjunctiva – the lining of your eyelid and eye). It is painful and annoying and is often described (as I can attest to) as having sand in your eye. I’ve also experienced uncontrollable eye twitches and excessive tears.

Now, I wear UV protective safety glasses under my helmet, so that when I take it off, I still have that line of protection from other welders around me.

Long-term effects of this are obviously blindness and skin cancer. It is so easy to prevent this, though, and I have a hard time understanding why some people choose not to. Long sleeve shirts should always be worn while welding, it’s a no-brainer; it’ll protect you from welding burns on top of the radiation. However, avoid wearing bright colors, especially white. They will reflect the light and UV radiation into your hood.

Welding is hot. 6000 to 8000 °C to be exact; literally hotter than the surface of the sun (which is a brisk 5600 °C). So, even though this seems like an obvious hazard, I wouldn’t be doing my job very well if I didn’t at least touch on this subject.

Metals are great conductors. Especially aluminum. It captures heat quickly and holds onto it for a very long time. That’s a reason why it’s so hard to weld (among many other reasons). TIG welding aluminum often requires what’s called a “TIG Finger”, a small heat shield designed to fit overtop your finger so you can slide it directly on the material without burning it. You can make your own by cutting the finger off an old welding glove and putting it over a new one. 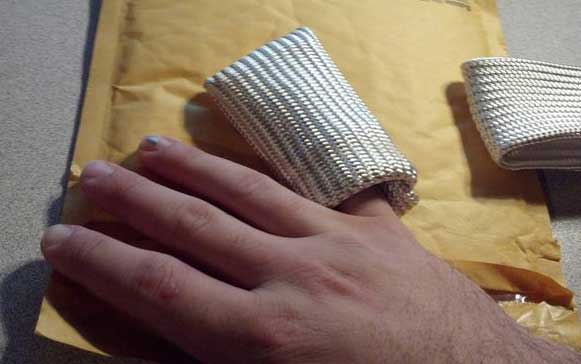 Avoid getting burns while TIG welding by using a TIG finger.

Continuing with the conductivity, be aware that the material will remain hot for up to an hour after welding, and can be warm to the touch for several hours. And no, you can’t throw some water on it to speed up the process (more on metallurgy in another article, perhaps). It is what it is, deal with it.

Another hazard is molten metal and slag. Overhead welding brings a particular story to mind; I was welding on a warehouse that had suffered substantial damage in a fire and was putting in reinforcements. The material I was welding to was not sound and was just melting away on me (literally) and got caught between my fall-protection and my waistband. It didn’t take long for it to burn through my denim jeans and into my skin, leaving me with a lovely 3rd-degree burn. I couldn’t wear a belt for about a month as it was healing. The plus side is I had an excuse to wear sweatpants for the next 4-5 weeks.

The moral of this story is, if you can, don’t create points on your body where molten metal and slag can get caught. Wearing loose clothes might seem like a fire hazard, but most of the time the sparks and slag will just bounce off you and not find its way down a boot. And above all else, wear cotton clothing. If you should catch on fire (which you ultimately will) the clothing will just smolder or burn, and not melt on to your skin.

Again, I will keep this short. It’s not a huge problem in the welding industry unless you’re an underwater welder. But it does happen.

I have been electrocuted twice in my entire welding career, both were very minor. The first time, it was raining out. I was welding inside an aircraft hangar and my cables were wet. They were run through puddles, and up the side of the building into a window. The problem wasn’t that the cables were wet, it was that my gloves were wet, from handling the wet cables. As soon as I struck the arc, it jumped through my hands and back to the work piece. I put on dry gloves, and it fixed the problem.

The second time, I was welding on a dirty bench. When I say dirty, I mean it was covered in spatter. I had a small portion of skin exposed (between my glove and my sleeve) and when I struck the arc, the spatter between the table and my project made it difficult for the arc to ground, so naturally it went through my arm and into the table. I solved this by grinding the table clean to get a better ground.

Now, I’m no expert on electricity, and quite honestly, I don’t know the exact science that allows arc welding to work, but I’m pretty sure attaching the ground clamp (lead) to your nipple and touching a live rod to your hand is a bad idea. As long as you avoid this, and keep things dry, you should be fine.

To wrap things up, welding can be a dangerous trade, but if you keep yourself educated on the risks, it’s easy to work around them. Don’t be a low-brow, knuckle-dragging cowboy who thinks he’s above it all. You will only look the fool in the end. Safety is an investment; it saves lives, and money in the long run.